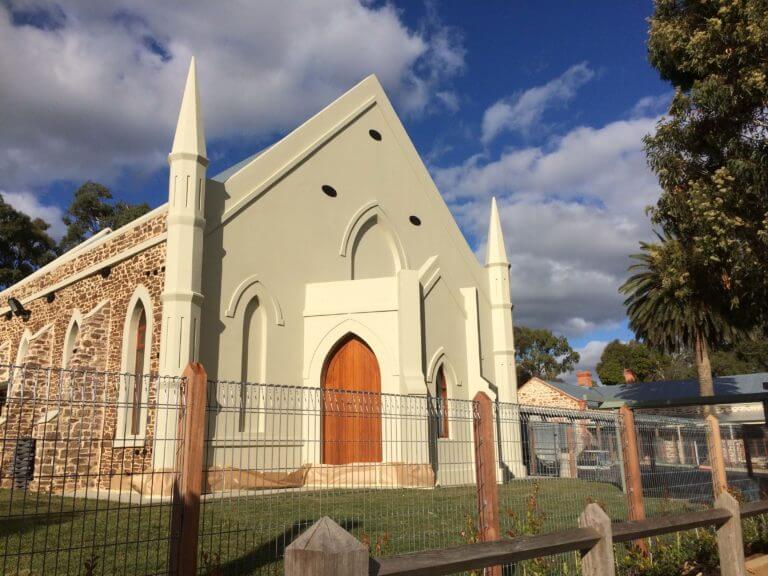 One of Adelaide’s oldest church ruins has been transformed into Morphett Vale’s newest childcare centre, converting an historic place of worship into a centre for children’s educational development, Global Sky Group announced today.

Officially opened on July 12 following government approval, the new centre is located at 7 William Street, Morphett Vale and will be catering for 75 children aged from six weeks to school age, employing 25 educators.

The new centre in the southern Adelaide suburb is the latest Australian childcare investment by Tokyo-based Global Sky, adding to its recent expansion into Adelaide’s Hallet Cove along with its centres in Queensland’s Gold Coast and Rockhampton, and in New Zealand.

“This former church has a proud history of being built by and for the local community, serving their needs for more than a century,” Mr Nagata said.

“We are delighted to now build upon this proud heritage by creating a childcare centre that will also seek to serve the community with distinction by providing the highest level of quality care and education.”

Consistent with Global Sky’s previous Australian childcare investments, the centre will be staffed and run locally, with a focus on employing qualified and experienced childcare educators from within the community.

“Global Sky has a philosophy of developing sustainable community hubs which add value to the local community. By applying our local and international experience, we will seek to deliver the best possible outcomes for children at the centre, including obtaining the highest rating under the government’s National Quality Standard,” Mr Nagata said.

As a heritage-listed property, the redevelopment by John Knox Development Company has been sensitive to the church’s character, while ensuring it meets the needs of its new residents.

Morphett Vale is a southern suburb of Adelaide in the City of Onkaparinga local government area, and is the largest suburb in the state of South Australia. In 2016, the city had an estimated resident population of nearly 170,000 people, with demand for childcare expected to continue rising in line with expected population growth.

In addition to its South Australian childcare centres, Global Sky currently operates centres in Southport, Robina Town and Mudgeeraba on the Gold Coast, along with its recently acquired four centres in Rockhampton and Yeppoon in central Queensland, as well as at Whitianga in New Zealand.

In Japan, Global Sky Education operates an English language school in Kanda, Tokyo, providing a range of educational services tailored to Japanese business people, casual learners and children, including educational exchanges to Australia as part of its “Hello Kids” program involving both parents and children.

With operations spanning environmental solutions, education and food and beverage businesses in Japan, Australia, New Zealand and the United States, Global Sky is actively working to add value to global communities, based on its philosophy of “Connecting the world for a brighter future.”